The UNITED STATES defines the fictitious entity spelled like your name with all caps - your strawrnan - as a "corporation". 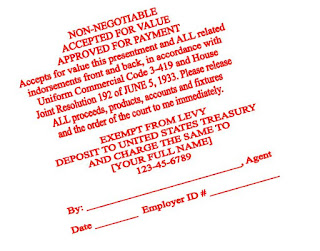 All U.S. Prisons Are Debtors Prisons

Issuing bonds for profit on prisoners has finally been deciphered.
Why do we have a rise in prosecution for non-violent crimes?
As soon as your social security number hits the system, there is
Someone is buying a bond in your name that accrues interest the longer you
Sit in jail..

The courts are operating under Statute Law. A “Statute” is defined in
BLACK’S LAW DICTIONARY, FOURTH EDITION REVISED as a kind of
Bond or obligation of record, being an abbreviation for “statute
Merchant” or “statute staple.”

Statute –merchant = is defined as a security for a debt acknowledged
to be due, entered into before the chief magistrate of some trading
town, pursuant to the statute 13 Edward I. De Mercatoribus, by which
not only the body of the debtor might be imprisoned, and his goods
seized in satisfaction of the debt, but also his lands might be delivered
to the creditor till out of the rents and profits of them the debt be
satisfied.

Traffic Ticket (Nearly any charging instrument can be handled this way.)

NOTICE:  When a petition for abatement is before a court, that court is charged with according to the petitioner to the advantage if there is doubt on the part of the court.  In addition, courts should take cognizance of the law that provides:  Where conditions for its issuance exist, abatement is a matter of right, not of discretion.  The misnomer or mis-description of a party defendant is ground for abatement, and grounds for abatements are the same for equity and law cases.

Also, please note that the abatement does not preclude petitioners remedies and relief available under any law forum for the injury and damages incurred by false accusations from corporate officers, and the like. 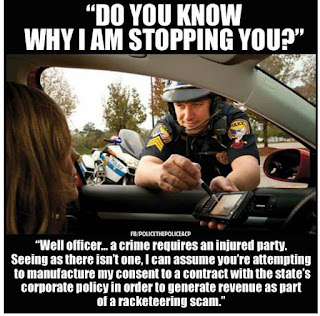 (These events occurred on Dec. 10, 2016 A.D. in the Municipal Court for the City of Tumwater, Washington.  Prior to entering the Court, Our Man has written on the face of the ticket "Refused for Cause without Dishonor, Abandoned Paper and Fraudulent Commercial Claim".  The ticket was returned to the Clerk of the Court within 72 hours of being issued.  About 10 days later, Our Man received a Notice of Mitigation Hearing regarding this matter for the stated date.  Our Man then put in a one page Notice and Demand for Abatement.  No other actions were taken prior to going into court.  I have changed only the name of Our Man.  All other information is true and correct as best as I know.)
Judge Lyman:  The case of JOHN HENRY SMITH.
(Our Man walks up to the Defendant's Lectern and starts shuffling his papers.  The Judge has a large pile of papers in his hand.  Probably 30 to 40 pages of paper.  Now Our Man has not put any of this in the case.  Hmmmm.)
Judge Lyman:  Are you JOHN HENRY SMITH?
(Our Man doesn't answer but continues to sort his papers.)
Judge Lyman:  Are you JOHN HENRY SMITH?  (A little emphasis on the question.)
Our Man:  Is this being recorded?
Judge Lyman:  Yes.  Are you JOHN HENRY SMITH?
Our Man:  If I may read my statement, I think it will become clear.
Judge Lyman:  O.K., go ahead.
Our Man:  I am John Henry of the family Smith.  I am here today to settle this matter.
Regarding Number TPD7Y2231291 I'm here today, appearing specially and not generally, to abate the matter of a worthless security interest known as a UCC-1 commercial lien in the form of a "TRAFFIC INFRACTION" against the Federal Reserve account in the name of JOHN HENRY SMITH, a decedent.  Said worthless security interest was created by an employee of CITY OF TUMWATER who identified himself as Jon Weiks #0032 on October 29, 2007, a mere pirate operating under color of law, who on said date and with subterfuge attempted to attach private copyrighted dead man statutes to me, a living Man, for the express purpose of
stealing my sweat equity .  I then exercised my Right of Avoidance to this offered commercial venture by returning this abandoned and defective paper for cause without dishonor to Sheryle Wyatt or her agent on October 31, 2007.  This was clearly a case of mistaken identity as the charged entity is a decedent under Title 26 USC and not me and this is the basis upon which I move for abatement.
"Sir, are you prepared to abate this matter now?"
(It would be helpful to know, that Our Man is about 6'5" tall and speaks rather slowly in a monotone voice;  totally unthreatening in his demeanor.)
Judge Lyman:  NO!
Our Man:      I will then continue my statement as follows: Let the record reflect that J.V. Lyman has denied the Principal's motion for abatement.  My rejection of the offer made by CITY OF TUMWATER to raid the Decedent's estate,  one JOHN HENRY SMITH, should have ended the matter, however, apparently this private commercial trading company known as "CITY OF TUMWATER/MUNICIPAL COURT DUNNS # 03-851-7355, SIC # 91110201, Cage Code # 1T9M3", a store front masquerading as an office in the judicial branch of Government and operating under the Department of Defense, is hell bent for it's own personal gain on probating the estate of JOHN HENRY SMITH, of which I am the Owner and Principal.  For the record, I object to the probating of said estate and do not give my permission thereto.  I am here today for the express purpose of establishing my Right of Avoidance if anyone should attempt to impose a Claim of Distress against the person of my collateral.  Any outcome on this matter other than an outright abatement or a check written to me for certified funds today assuming the transfer of funds has already taken place, will result in a Demand to the DTCC (Depository Trust and Clearing Corporation) for Investigation of Fraud on the TRAFFIC INFRACTION, a fraudulent
security.
I now ask you the following:
Does the prosecutor have a 1099OID in regard to the "charge"?
Judge Lyman:  There is no Prosecutor here.
Does the clerk?
(Judge Lyman doesn't answer.  Just stares at Our Man.)
I've got my claim here…where is yours?
(Again Judge Lyman doesn't answer.  Just stares at Our Man.
Our Man holds up his IRS forms 706, 709, and 1099OID.)
Tell me, Sir, who the payor is and also who the recipient of the funds is.

If you're the recipient, then I guess you'll be paying the transfer taxes on this charitable contribution from the Decedent's estate which you are attempting to probate here.  We both know that if you haven't paid the tax, you have no claim in Equity.

Sir, have you already submitted a 1099R for that purpose?
If you've acquired funds from the decedent's estate that makes you a qualified heir and not paying the taxes makes the property you stole contraband which means all the forfeiture statutes kick in.
Judge Lyman:  I have dismissed this case.
(Our Man just keeps on reading.)
Unless you abate this matter here and now OR give me a check for the funds you stole, I will be alerting the Criminal Investigation Division of the IRS that you are guilty of tax evasion and money laundering and to start an investigation on you personally with regards to my estate.
Judge Lyman:  I have dismissed this case!  (The Judge is turning red and sweating).
(Our Man just walks up to the lady acting like a Clerk and hands her all his IRS forms and leaves.  The Judge is visibly shaken by the whole matter.)