Since the early 1960's, State governments — themselves specially created, juristic, corporate persons signified by all caps — have issued Birth Certificates to "persons" with legal fiction all-caps names. This is not a lawful record of your physical birth, but rather the birth of the juristic, all-caps name. It may appear to be your true name, but since no proper name is ever written in all caps (either lawfully or grammatically) it does not identify who you are. The Birth Certificate is the government’s self-created document of title for its new “property,” i.e. the deed to the juristic-name artificial person whose all-caps name “mirrors” your true name. The Birth Certificate brings the new all-caps name into colorable admiralty/maritime law, the same way a ship (and ship of state) is berthed.
When a child is born, the hospital sends the original, not a copy, of the record of live birth to the "State Bureau of Vital Statistics," sometimes called the "Department of Health and Rehabilitative Services" (HRS). Each STATE is required to supply the UNITED STATES with birth, death, and health statistics. The STATE agency that receives the original record of live birth keeps it and then issues a Birth Certificate in the corrupted, all-caps version of the baby’s true name, i.e. JAMES WILBER SMITH.
cer-tif-i-cate, noun. Middle English certificat, from Middle French, from Medieval Latinceruficatum. from Late Latin, neuter of certificatus, past participle of certificare, to certify, 15th century. 3: a document evidencing ownership or debt.-- Merriam Webster Dictionary (1998).
The Birth Certificate issued by the State is then registered with the U.S. Department of Commerce -- the Executive Office -- specifically through their own sub-agency, the U.S. Census Bureau, which is responsible to register vital statistics from all the States. The word "registered," as it is used within commercial or legal based equity law, does not mean that the all-caps name was merely noted in a book for reference purposes. When a Birth Certificate is registered with the U.S. Department of Commerce, it means that the all-caps legal person named thereon has become a surety or guarantor, a condition and obligation that is automatically and unwittingly assumed unless you rebut the presumption by effectively noticing them: “It ain’t me.”
Surety. The person who has pledged him or herself to pay back money or perform a certain action if the principal to a contract fails, as collateral, and as part of the original contract. -- Duhaime's Law Dictionary.
1: a formal engagement (as a pledge) given for the fulfillment of an undertaking.
2: one who promises to answer for the debt or default of another.
Under the Uniform Commercial Code, however, a surety includes a guarantor, and the two terms are generally interchangeable.
Merriam Webster's "Dictionary of Law" (1996).
Guarantor. A person who pledges collateral for the contract of another, but separately, as part of an independently contract with the obligee of the original contract.
Duhaime's Law Dictionary.
It is not difficult to see that a state-created Birth Certificate, with an all-caps, name is a document evidencing debt the moment it is issued. Once a state has registered a birth document with the U.S. Department of Commerce, the Department notifies the Treasury Department, which takes out a loan from the Federal Reserve. The Treasury uses the loan to purchase a bond (the Fed holds a “purchase money security interest” in the bond) from the Department of Commerce, which invests the sale proceeds in the stock or bond market.
The Treasury Department then issues Treasury securities in the form of Treasury Bonds, Notes, and Bills using the bonds as surety for the new “securities.” This cycle is based on the future tax revenues of the legal person whose name appears on the Birth Certificate. This also means that the bankrupt, corporate U.S. can guarantee to the purchasers of their securities the lifetime labor and tax revenues of every “citizen of the United States”/American with a Birth Certificate as collateral for payment. This device is initiated simply by converting the lawful, true name of the child into a legal, juristic name of a person.
Dubuque rei potissinia pars prineipium est — The principal part of everything is in the beginning. (“Well begun is half done.”)
Legally, you are considered to be a slave or indentured servant to the various Federal, State and local governments via your STATE-issued and STATE-created Birth Certificate in the name of your all-caps person. Birth Certificates are issued so that the issuer can claim “exclusive” title to the legal person created thereby. This is further compounded when one voluntarily obtains a Driver’s License or a Social Security Account Number. The state even owns your personal and private life through your STATE-issued marriage license/certificate issued in the all-caps names. You have no rights in birth, marriage, or even death. The state holds title to all legal persons the state creates via Birth Certificates until the rightful owner, i.e. you, reclaims/redeems it by becoming the holder in due course of the instrument."
And this pic shows a REGISTRATION of a Record of Birth, which would tend to support the claims about the BC in the above article. Why the heck would a record of birth need to be REGISTERED? And with a Department of Commerce? Record alone is all that's needed to prove that the birth happened, as long as it's certified (stamped and signed by a proper officer of a State) 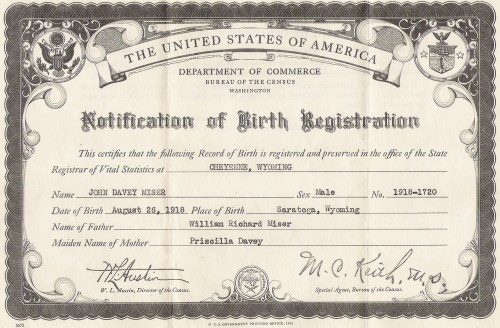