Join my Team,become an independent Karatbars Affiliate...gold is going up in price right now.

Ive been a karatbars affiliate for 6 years now and earn a very good income,easy and fun business to get involved in,I always get paid on time and earn Gold for my retirement.free training,get started today!
Click Link Below

Fraud behind the Marriage License!

A Marriage License Application is a request to your “Masters” for permission to marry.
If you ever had any claim of sovereignty before that date; you lost it completely when you
applied for and married under a marriage license. Sovereignty means: “To assert ones
independence and to claim to be self-governing.” The license isn’t necessary and never has
been because a marriage has always been just a contract, witnessed by God, between a man
and a woman! Who told you that you must apply for a license? It is the official you chose to
conduct your ceremony? The official just happens to be a licensed government official and
his license prevents him from conducting marriage ceremonies without the issuance of a
marriage license. Did Moses or Jesus ever say or profess that a marriage is not recognized
by God, without a license? 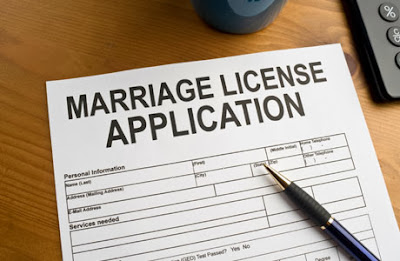 Here’s the Fraud behind the License:
Those who apply for and marry pursuant to a marriage license have now added a third party
to their marriage contract! The third party is the Master, by and through his Agent, the
Corporate State. The marriage license bestows the State with the legal right to decide the
fate of the husband, wife and the possessions they procured during their marriage, should
the marriage fail. Their divorce must now be decided by and through the States Corporate
Court by a Corporate Judge, and the Judges first and foremost concern is the “interest of the
State.” The interest of the bride and groom is now secondary.
[See: VanKosten v. VanKosten, 154 N.E. 146]. A comment by the Judge deciding this
divorce says it all! “The ultimate ownership of all property is the State: individual so called
ownership is only by virtue of government, [i.e.] laws amounting to mere use
must be in accordance with law and subordinate to the necessities of the state.” [Also
See: Senate Document No. 43 of the 73rd Congress, 1st Session] and [Brown v. Welch, U.
S. Superior Court].
d) The term “license” is defined in law as, “A permit to do something illegal.” [See:
Blacks Law Dictionary, 6th or 7th Edition]. Therefore, all licenses are permits to violate
the only real law! Inalienable rights are the rights bestowed upon all living men, by God
at birth! All other laws are subordinate to God’s law. The controlling government wants
us to rely on their laws, so they demand that we apply for a license! Another example is a
“Drivers License.” It is your God given right to travel the roadways of this nation and no
government has any right to restrict, tax or license your pursuit of happiness! The only
exception is a Driver of a Commercial Vehicle. The governments have a right to regulate
Commerce, which means trade. Anyone operating a vehicle in Commerce must be
licensed but all others are absolutely free to travel without one! The foreign Agents in
power; have changed the common meanings of words to encapsulate and control every
Sovereign. They succeed in this intimidation through the corporate courts and police
enforcement by officers who have been brainwashed and reinforced by mandatory
training programs.
Share |
Email ThisBlogThis!Share to TwitterShare to FacebookShare to Pinterest
Newer Posts Older Posts Home
Subscribe to: Posts (Atom)