Arrest is presumed to be false if …

MEMORANDUM OF POINTS AND AUTHORITIES

1.  Arrest is presumed to be false;  officer has the burden of proof
The only thing the plaintiff needs to plead and to prove if alleging  false arrest, is either (1) that the defendant made an arrest or imprisonment, or (2) that the defendant affirmatively instigated, encouraged, incited, or caused the arrest or imprisonment.  Burlington v. Josephson, 153 Fed.2d 372,276 (1946).

3.  Warrant must be valid
A constable justifying an imprisonment under a warrant must show that the warrant on its face is legal, and that the magistrate had jurisdiction of the subject-matter. 51 L.R.A. 197, Poulk v. Slocum, 3 Blackfords (Ind). 421.  (Meaning, you should also demand a copy of the affidavit giving the judge probable cause to issue the warrant.  All warrants must issue upon submission of an affidavit of probable cause.)
“A warrant is regarded as insufficient and thus void if, on its face, it fails to state facts sufficient to constitute a crime.”  Wharton’s Crim. Proc., 12th Ed., vol. 1, p. 152 (1974).

5. False arrest is assault and battery
"An illegal arrest is an assault and battery.  The person so attempted to be restrained of his liberty has the same right, and only the same right, to use force in defending himself as he would have in repelling any other assault and battery.”  State v. Robinson, 72 Atl.2d 262 (1950).
"An arrest without warrant is a trespass, an unlawful assault upon the person ... where one is about to be unlawfully deprived of his liberty he may resist the aggressions of the offender, whether of a private citizen or a public officer, to the extent of taking the life of the assailant, if that be necessary to preserve his own life, or prevent infliction upon him of some great bodily harm.”  State v. Gum, 69 S.E. 464 (1910).
“Every person has the right to resist an unlawful arrest ... and, in preventing such illegal restraint of his liberty, he may use such force as may be necessary.”  Columbus v. Holmes, 152 N.E.2d 306 (1958).

6. No handcuffs (sorry, OSHA)
“But a constable cannot justify handcuffing a prisoner unless he has attempted to escape, or unless it be necessary in order to prevent his doing so.”  51 L.R.A. 216.
“The handcuffing was utterly unlawful.”  Osborn v. Veitch 1 Foster & Fin Eng Rep 317.

7. Go immediately to a magistrate (no photographs, no fingerprinting)
“The one arresting has “a duty to immediately seek a magistrate,” and failure to do so “makes a case of false imprisonment.” Heath v. Boyd, 175 S.W.2d. 217 (1943); Brock v. Stimson, 108 Mass. 520 (1871).
"To detain the person arrested in custody for any purpose other than that of taking him before a magistrate is illegal.”  Kominsky v. Durand, 12 Atl.2d. 654 (1940).
"Any undue delay is unlawful and wrongful, and renders the officer himself and all persons aiding and abetting therein wrongdoers from the beginning.”  Ulvestad v. Dolphin, 278 Pac. 684 (1929).
"The taking of the plaintiff’s picture before conviction was an illegal act.” Hawkins v. Kuhne, 137 NY Supp 1090, 153 App Div 216 (1912).
"The power to arrest does not confer upon the arresting officer the power to detain a prisoner for other purposes.”  Geldon v. Finnegan, 252 N.W. 372 (1934).
"Compulsory fingerprinting before conviction is an unlawful encroachment...[and] involves prohibited compulsory self-incrimination.”  People v. Helvern, 215 N.Y. Supp. 417 (1926)
Summary
A warrant must be issued and be signed (no rubber stamp) by a judge who has jurisdiction;
must state the facts showing jurisdiction;
must be based upon probable cause;
must name the offense committed;
must contain an affidavit (under oath) by the accuser, stating FIRST HAND facts constituting a crime;
must name the party to be arrested, or describe him sufficiently to identify him;
must offer the warrant and the affidavit for inspection upon request;
No handcuffs;
must take me immediately before a magistrate, and hold me for no other purpose (no photographs, no fingerprinting);
You are responsible for everything that happens to me even if you relinquish custody to an assign;
Unlawful arrest is assault, battery & trespass;
There is no immunity in a false arrest case;
Good faith is not a defense to sustain false arrest.
Lastly . . . If the warrant states as cause to issue, a mere civil/statutory infraction not rising to the level of a capital crime . . . the officer must produce title to your biological property/body, before said officer can make the arrest and take possession of the biological property.  You do not by accommodation, accept the offer of arrest for any statutory infraction unless the statute defines a capital crime and probable cause exists.
NOTE:
The arresting officer that this information has been presented to, has both a civil and legal duty to become informed with the material incorporated herein before an arrest is determined to have cause to be made.

A review of countless United States Supreme Court decisions since the 1938. landmark case. Erie Railroad v. Tompkins. (304 U.S. 64-92) clearly establishes that only the State has Constitutional Rights, not the People. The People have been pledged to the bankruptcy of 1933. The federal law administered in and by the United States is the private commercial "law" of the CREDITORS. That, due to the bankruptcy. every "citizen of the United States" is pledged as an asset to support the bankruptcy, must work to pay the insurance premiums on the underwriting necessary to keep the bankrupt government in operation under Chapter II Bankruptcy (Reorganization). That upon the declared Bankruptcy, Americans could operate and function only through their corporate colored. State created, ALL-CAPITAL-LETTERS-NAME, - that has no access to sovereignty, substance, rights, and standing in law. The Supreme Court also held the "general (Universal) common law" no longer is accessible and in operation in the federal courts based on the 1933, bankruptcy, which placed everything into the realm of private,color-able law merchant of the Federal Reserve CREDITORS. To take this to a different level and not only explain why you pay taxes, but also why you do not own the house you live in, the car you drive. or own anything else you think you've bought and paid for etc. Their State Government and its CREDITORS own It all. If you think you own your home just because you believe you paid it using those Federal Reserve Notes, just like everything else you possess by permission of Government, simply stop paying your taxes, (user-fees), (licenses) and see just how long Government and the CREDITORS allow you to keep it before they come to take it away from you.How can all this really be? Why haven't you been told all of this before now? Ignorance of the law is no excuse. Every man is deemed (required) to know the law. Government expects you to know the law, and holds you fully accountable for doing so. Ignoring these facts will not protect you. The majority of American's have been given a Public government Education to teach them only what the Public. i.e. government (CREDITORS) wants them to know. It is and always has been each individual's personal responsibility, duty and obligation to learn and know the law. 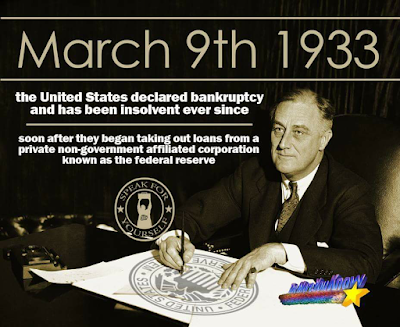